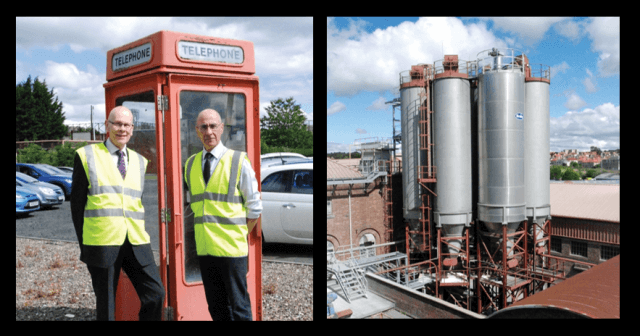 Forbo Flooring Systems holds the record for being John White & Son’s oldest customer: staff at Auchtermuchty were supplying Michael Nairn & Co of Kirkcaldy (as the company was known then) with weighing machines way back in the nineteenth century.

The linoleum manufacturer has since been through some ups and downs, and narrowly escaped closure in the 1970s when linoleum became unpopular. But it rose from the (almost) ashes to become the only linoleum manufacturer in the UK, and now has a reputation for its bespoke designs and high quality products.

John White & Son has been with first Nairn and then Forbo through all these ups and downs, steadfastly providing, servicing, maintaining and calibrating their weighing machines through thick and thin, good years and bad.

John White & Son have used their unrivalled technical expertise to provide an automatic system that enables Forbo’s staff to weigh a blended mix to make a specific type of linoleum. It has minimised losses and made production much more accurate and consistent.

But the jewel in the crown of John White & Son’s technological solutions has to be the system they devised for Forbo’s electronic weighbridge, where drivers handle the whole weighing process themselves. This means the information about their delivery is automatically updated via the computer network without any intervention from staff in the site office. And to protect the drivers from wild and windy weather, the scanning equipment is housed in a very retro red telephone box.

John White & Son ticks all the right boxes for Forbo Flooring Systems. And that, as Mike McCartney says, is why ‘we wouldn’t think about using anybody else.’

You can find out more about which cookies we are using or switch them off in settings.

This website uses cookies so that we can provide you with the best user experience possible. Cookie information is stored in your browser and performs functions such as recognising you when you return to our website and helping our team to understand which sections of the website you find most interesting and useful.

Strictly Necessary Cookie should be enabled at all times so that we can save your preferences for cookie settings.

If you disable this cookie, we will not be able to save your preferences. This means that every time you visit this website you will need to enable or disable cookies again.

This website uses Google Analytics to collect anonymous information such as the number of visitors to the site, and the most popular pages.

Please enable Strictly Necessary Cookies first so that we can save your preferences!